When you write some piece of code and want to add that code in kernel , one way of doing this is to place your code in one of kernel source directory and recompile the kernel code . So your code will also compile with whole kernel code. Your code will be part of kernel booting image.

But suppose if you want to do little change in your code then again you need to rebuild your kernel to have your code compiled. So don’t you think it’s a tedious task of recompiling kernel again and again even for just a silly change in your code. To avoid this limitation with many other limitations Linux introduced the concept of Loadable kernel modules.

Kernel modules are compiled separately and whenever there is requirement for that module , you can insert it into kernel by using of some commands. When required work is done by module and no longer required you can easily unload your module by running some commands.

Because of so many features provided by kernel modules , are used for various things

From functionality of loading and unloading of kernel module some time people thinks its same as user modules. But there are lot of difference in both. 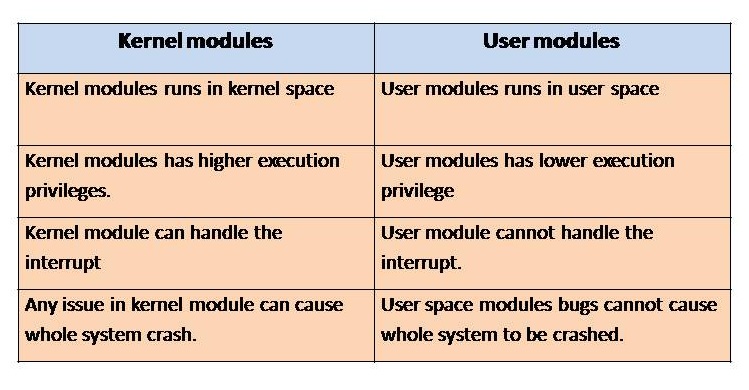