At the time of init , driver need to register with kernel. We can register driver by following function

major­_ number :- In our driver code we will assume major number is 90 .

device:- device is the name of device for which you are writing the driver. In our character driver we are keeping name of our device is “mydev” .

file_operation:- File operation is the structure which contains the functions supported by your device.

At the time of exit our driver needs to be unregister with kernel. We can unregister it by using following function

Our driver has to implement all the functions supported by our driver. In our character driver we are implementing open, read , write and release function.

Below is the code of our driver . Save this file as test.c

To build driver we need to write, make file and save it in the same directory where our driver code is save. Below is the example of make file.

save this file as Makefile. Please note that name of file should has M capital.

now give make to build the module.

it will generate test.ko file as an output.

We can insert our driver module in kernel by using insmod command.

As we know that for user our device is just a file. so we need to create a device node in kernel device tree. Following is the command to create the device node

path:- path is the place where device file needs to be created . Mostly we create our device file under /dev directory. we give same name of device file which we registered at the time registering our driver. As in above code wehad given device name is “mydev”. So we will give path as /dev/mydev.

type:- type will be “c” or “b” . Weather our device will be registered as character device or block device.

major :- Major number of driver. In our case we assumed device major number as 90.

it will list out all the devices registered in your system.

our driver is ready now , device node is created . we can test our driver by writing a small user space application which will open our device and will try to write and read to device. Following is the code of our test application 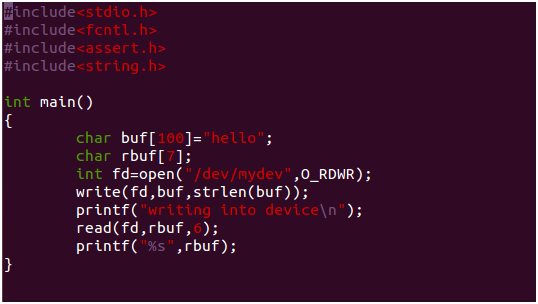 this application is writing hello to device and reading same from device.

execute this file to test the driver by following command.